This is the amazing moment a large bull elephant scrapes the side of a car ferrying safari guests at a South African wildlife reserve.

Ezulwini the elephant, who is between 45 and 50 years old, is a favourite at the Sausage Tree Safari Camp on the Balule Private Nature Reserve.

Driver Brass Brassett said Eluzwini is known for his love of cars and often comes close to people on a safari tour.

During the incident in Mopani, South Africa, which took place on November 15, the large elephant ran his tusks down the side of the vehicle.

Ezulwini is know as a ‘big tusker’ which means his tusks are large enough to reach the ground.

A 2016 report by the BBC suggested there were only around 30 big tuskers left in the wild.

According to the wildlife park: ‘ Simply put, Ezulwini lives up to his name, which means “from heaven” in the Zulu vernacular.

‘He’s a true gentle giant and seems somehow drawn to people, almost taking pleasure from being with them.

‘As with all elephant bulls, Ezulwini has an enormous home range and is prone to wandering, most often alone, but sometimes in the company of younger bulls or shadowing breeding herds.

Some neighbouring wildlife reserves in South Africa have been removing their fences to allow elephants to move freely across the entire range.

However, Ezulwini’s comfort in the presence of humans means he is at greater risk of being killed by poachers looking to steal his tusks. 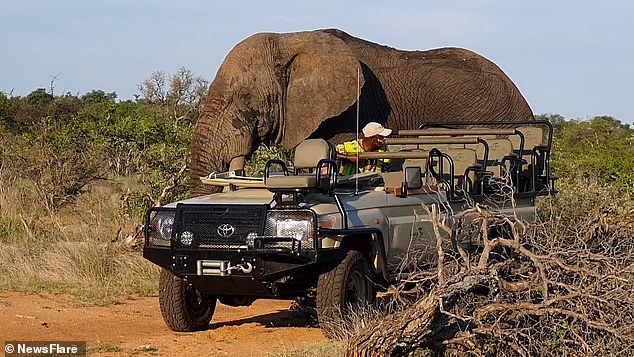 Ezulwini, pictured, is known for getting close to cars carrying tourists around the safari park