Two young elephants were caught in a tangle when they were photographed having a play fight in South Africa.

The adorable African elephants were photographed with their trunks entwined with each other at the Addo Elephant National Park.

Professional photographer Anne Laing, 59, caught the elephants learning how to use their trunks in the stunning images below.

Ms Laing, from Pretoria, South Africa, said: ‘There are plenty of other animals in Addo but I go there primarily to shoot elephants.

‘I always spend the whole day in the park from before 7am to 6pm. 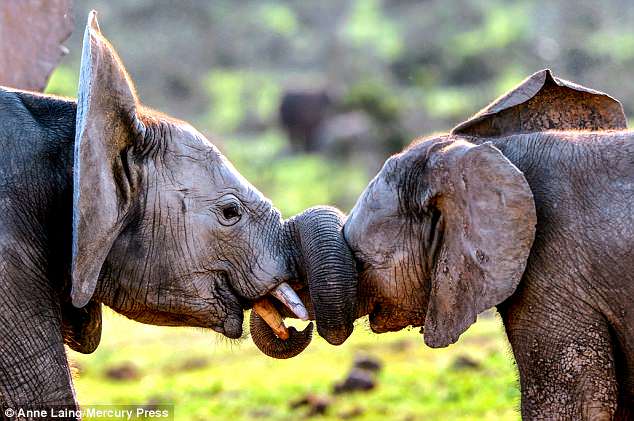 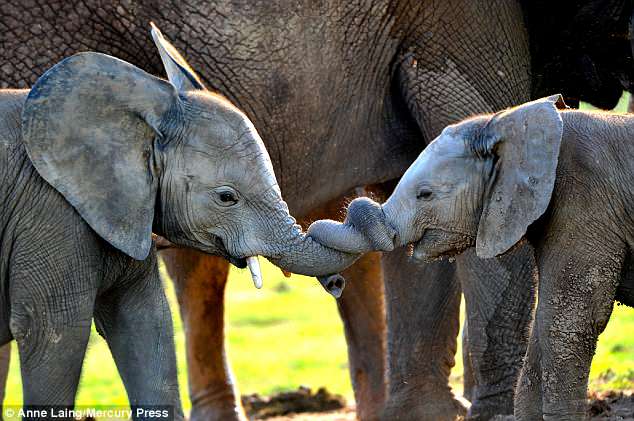 ‘The best way to find elephants in Addo, where the vegetation is mostly really dense, is to drive very slowly and listen for them breaking branches then one knows they are close by.

‘Twisting trunks is something young elephants do to while play-fighting but it also teaches them how to fully control their trunks.

‘They are also mimicking adult behaviour as this is a form of greeting.

‘Until they’re three months old they don’t have control of their trunks and they just flop around but as they get older they have to be able to use them as humans would use an arm, hand and straw – for drinking water.’

Ms Laing, who has been a photographer for around 35 years, also caught the elephants drinking and spraying water on one another.

She said: ‘Water is critical to elephants as they need to drink every day, with adults drinking up to 150 litres per day. 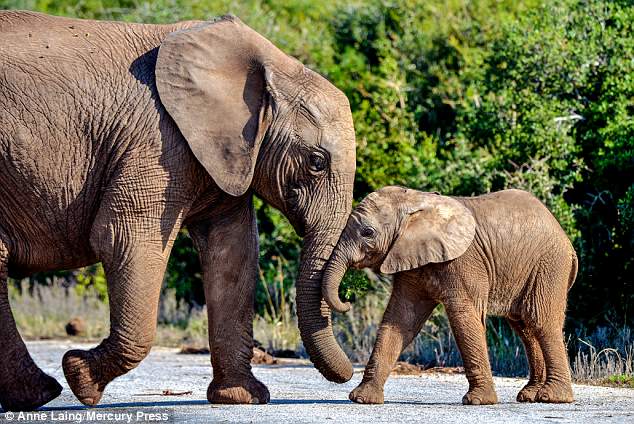 Anne Laing, who took the photographs, also caught this touching image of a mother elephant stroking her baby

‘In one of the photographs after drinking they use their trunks to spray their bodies with water to keep cool.

‘They often have to walk many miles to find water to drink and then walk many more miles away from the water again so need to try and keep cool.’

She said: ‘The mother is caressing her baby elephant with her trunk – their trunks are very sensitive to touch.’

Ms Laing has built up an impressive portfolio during her career, having taken pictures from sporting events such as the rugby, cricket and football World Cups in South Africa, France and England, as well as the Rio Olympics in 2016.

She added that she tries to go on ‘as many wildlife trips as possible’ and also hopes to photograph at the next Rugby World Cup and Tokyo 2020 Olympics.