With Melbourne basking in a continued heatwave this baby elephant was more than happy to go for a swim.

Once the seven-day-old seemed to be steady on his feet, the keepers thought it was time to refill the pool in the elephant enclosure. Oh baby: Num-Oi checks her calf is all right when he loses his footing to receive a full dunking 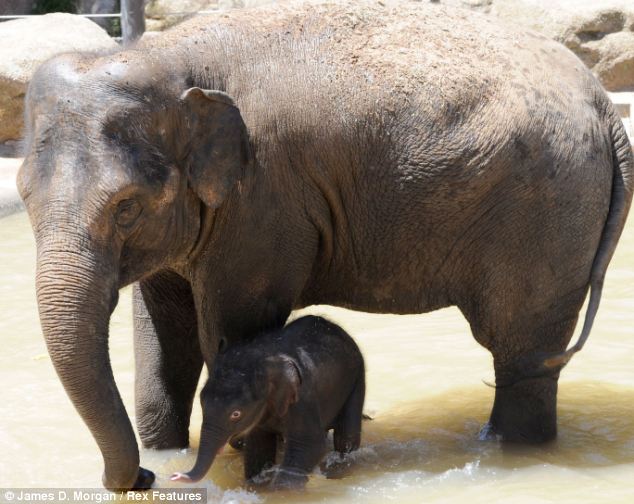 New experience: The calf stays close to mum as they venture into the water***

And with the city experiencing temperatures of 35°C the youngster – not to mention mum Num-Oi – were grateful to go for a paddle to cool off.

While Num-Oi had no trouble with the shallow water, her tiny, in comparison, son seemed to have a few problems – at one point losing his footing and suffering a full dunking.

The youngster’s arrival last week was something of a drawn-out affair – after Num-Oi’s 22-month pregnancy, she was in labour for four days.

However, her 131kg bundle of joy was born safely and on his feet in minutes. 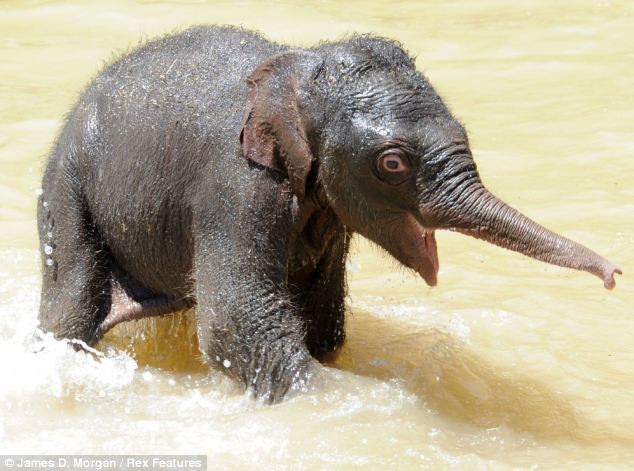 Cool dude: The calf looks as though he is smiling as he confidently strides through the water 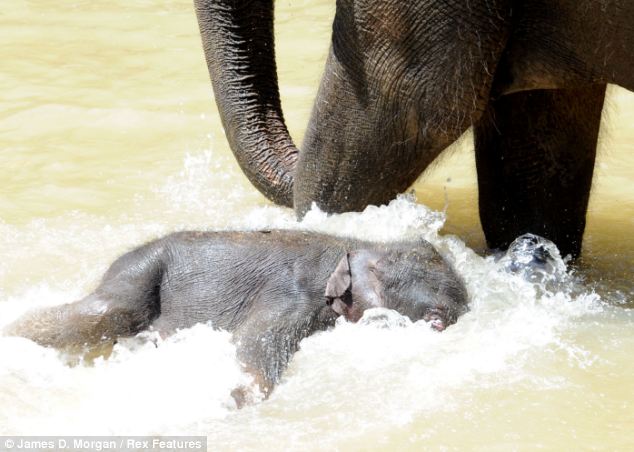 Going down: The calf is heading for full submersion as he cools off in the extreme heat 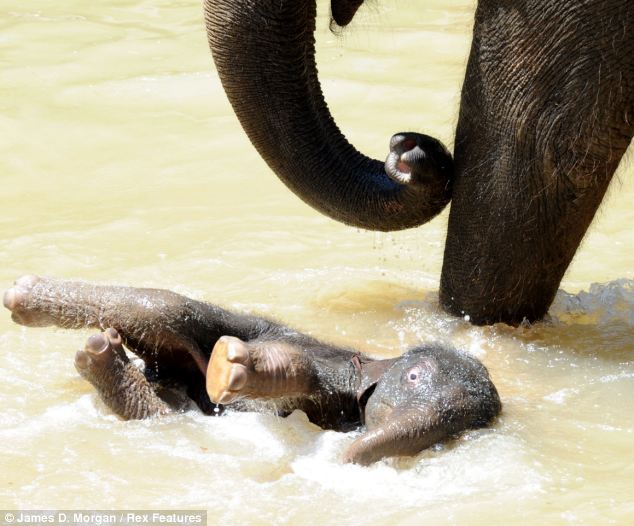 Touching base: The calf’s feet are aloft as he rolls over during the the hottest heatwave on record for Australia 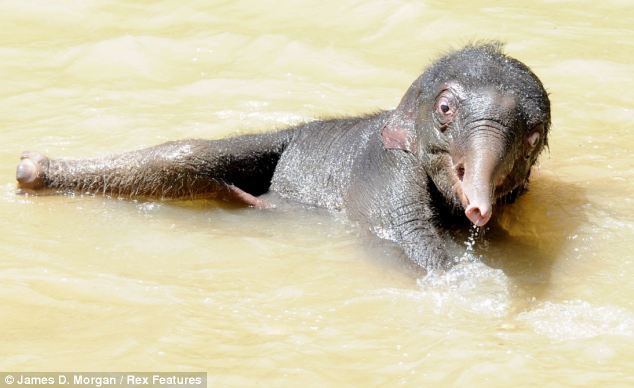 Down but not out: The calf gets to grips with a new medium as he goes to stand up, trunk outstretched

According to keepers, first timer Num-Oi is proving to be a natural mother and is very attentive to her calf.

Though he hasn’t been officially named yet, the baby has been nicknamed ‘Dougie’ after his favourite pastime of digging in the dirt of the enclosure.

Thousands rushed to the beaches as temperatures hit 45.8°C, 0.5°C above the previous hottest day in 1939.

At Sydney airport, the temperature was even higher – 46.4°C. 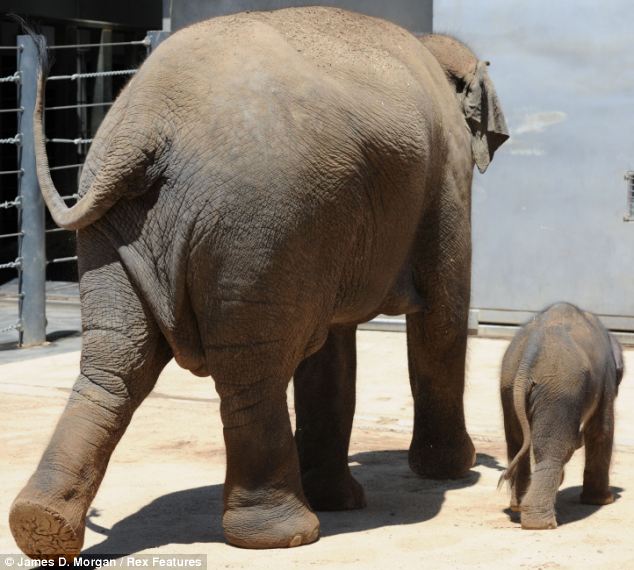 Time to play: The elephants set off for the pool side-by-side, their tails swishing 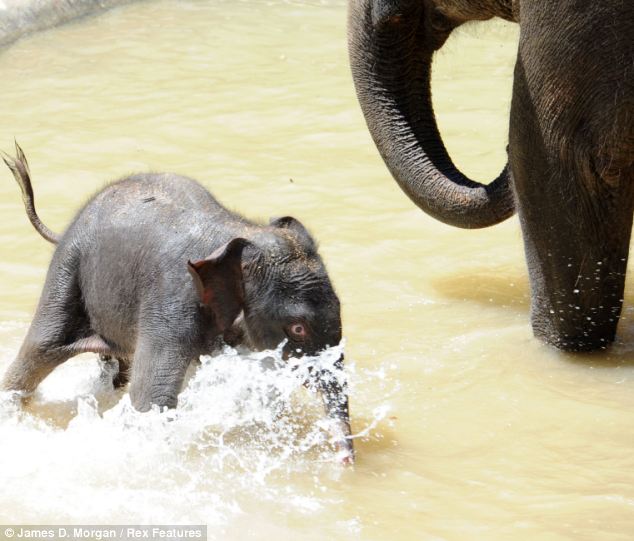 He’s on his way: The calf makes a splash as he loses his footing in the enclosure’s pond 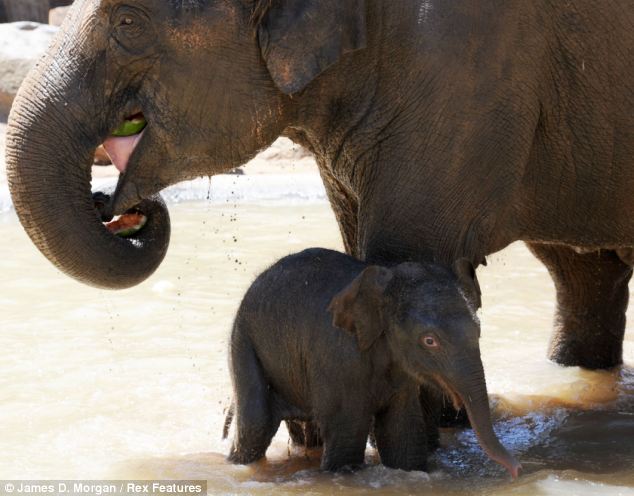 Fruity snack: Mother keeps her strength up with a watermelon as she shades her calf 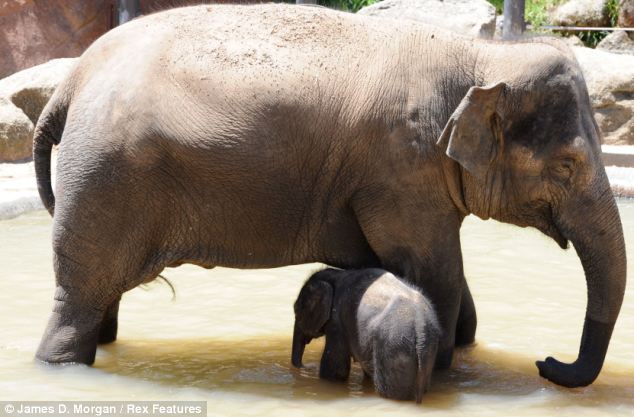 Knee deep: Chance to cool off in the heat