It took just one bullet to change Zongoloni’s life forever.

In September 2013, people spotted an injured mother elephant stumbling around the bush in Kenya. She had a baby calf with her – Zongoloni, who was only around 18 months old at the time.

The David Sheldrick Wildlife Trust (DSWT) and Kenya Wildlife Service Tsavo Mobile Veterinary Unit quickly dispatched a team. When they found the pair, they anesthetized them so they could treat the mom’s injury – a poacher’s bullet had struck her in the right leg, shattering the bone.

The vet team cleaned the mother’s wound and gave her painkillers, antibiotics and anti-inflammatories. But since the bullet was embedded so deeply into her bone, they worried that she might not make it.

“Although the team did all they could, the prognosis was relatively poor as she was struggling to walk far and with a young calf,” Robert Brandford, executive director of DSWT UK, told The Dodo. “This was a very difficult position to be in.”

Two weeks later, the worst happened. The mother elephant collapsed and couldn’t get back up. Zongoloni stayed with her mom, bravely chasing off any intruders, and stroking her mom with her trunk. But without her mom’s milk, Zongoloni became weak and tired.

The rescue team returned. At this point, they couldn’t do anything to save the mom. However, they could help Zongoloni 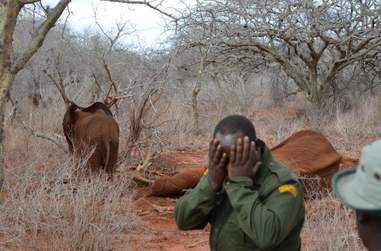 “The saddest part was knowing that when we found her collapsed, both mother and calf had been without food or water for some time as the bullet wound had left her almost completely immobile,” Brandford said. “This agony, pain and heartbreak had been caused from a single bullet. Zongoloni’s mother was clearly targeted for her ivory tusks.”

The rescue team tranquilized Zongoloni to keep her calm, and transported her to DSWT’s Nairobi nursery, a place that cares for orphaned elephants and other animals who have lost their families to poaching.

Initially, Zongoloni was quite aggressive with the keepers, and she refused to take a bottle. But when she met some of the other elephant orphans at the nursery, she seemed to calm down.

“Zongoloni had a very clear recollection of her upbringing and time with her mother in the wild,” Brandford said. “To help with her emotional stress, we would bring the other orphans to feed just outside of Zongoloni’s stable so she could feel part of the orphan herd. This helps immeasurably with all new arrivals and gives them a sense of belonging once more.”

Zongoloni’s life was never the same after losing her mom, but in time, she fell into a routine at the nursery and bonded with the other orphans.

Now, four years later, Zongoloni lives at DSWT’s rehabilitation unit at Umani Springs in Kenya, which brings her a step closer to returning to the wild.

“Zongoloni enjoys frolicking around in the mud bath following her morning milk feed,” Brandford said. “She is also feeling the call of the wild and spending more time with wild elephant herds!”

“Whilst our wish is that all elephants can remain safe and free in the wild, for now, we must be ready to respond to any elephant orphan in need – for as long as it takes,” Brandford said. “Zongoloni will one day return to the wild and begin a family of her own. The man took away her mother’s life and we are determined to give Zongoloni the wildlife she truly deserves.”