Incredible snaps have been taken of the moment when Nellie the elephant skillfully manages to step over a barbed wire fence put up by a farmer in Africa.

The four-ton beast has chosen to roam across Africa by daintily skipping over fences instead of trampling everything in its wake. It elegantly lifts its front right leg over the wire, taking care not to touch it, then its left leg before repeating the process with its hind legs. After one final push, it is free and ready to hunt for food.

The photos show that Nellie clearly has respect for her surroundings and doesn’t want to be blamed for any damage. Elephants are known for their intelligence and ability to solve problems – Nellie’s antics confirm how true that is. 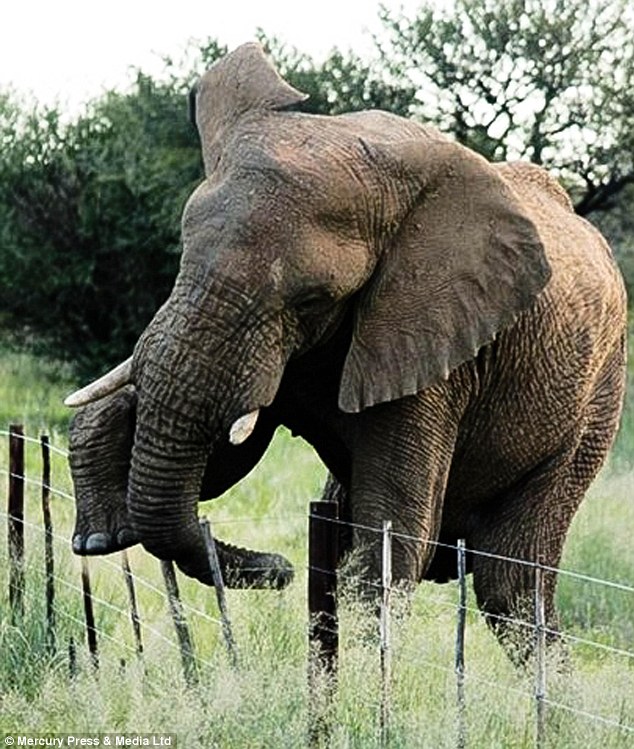 Clever fella: The elephant skillfully steps over the farmer’s barbed wire fence, choosing not to trample all over it 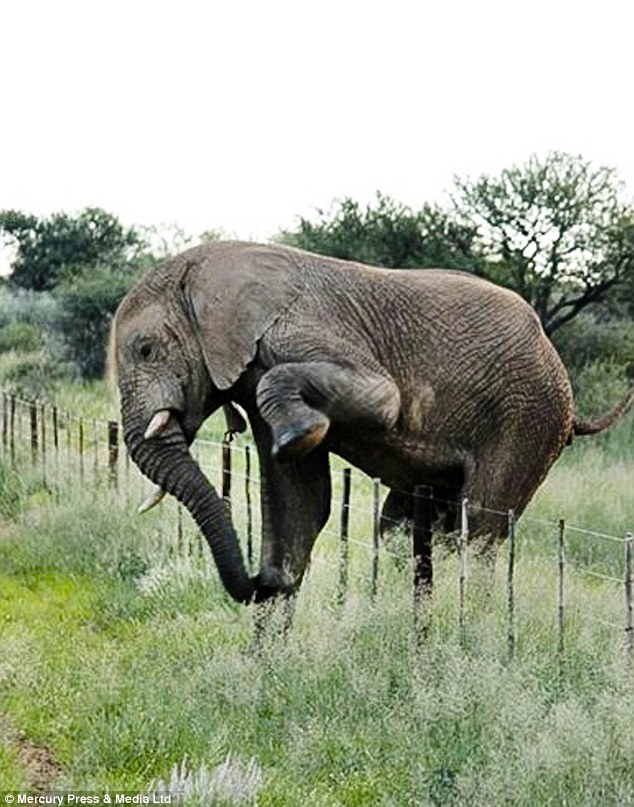 Easy does it: His front right leg goes over first while keeping upright

The images were posted on Facebook by Indri Ultimate Wildlife Tours, of Cape Town, South Africa, which said: ‘Our feeling when looking at these photographs is one of utter respect.’

They will come as no surprise to scientists who have studied elephants’ brains, particularly when confronted with danger. Their ability to remember means elephants can dodge not just fences but droughts too.

The theory is that older females memorize earlier severe droughts and how the elephants at the time survived it.

This means they know where to find distant food and water sources giving them a better chance of survival as climate change becomes a real threat to their natural habitats. 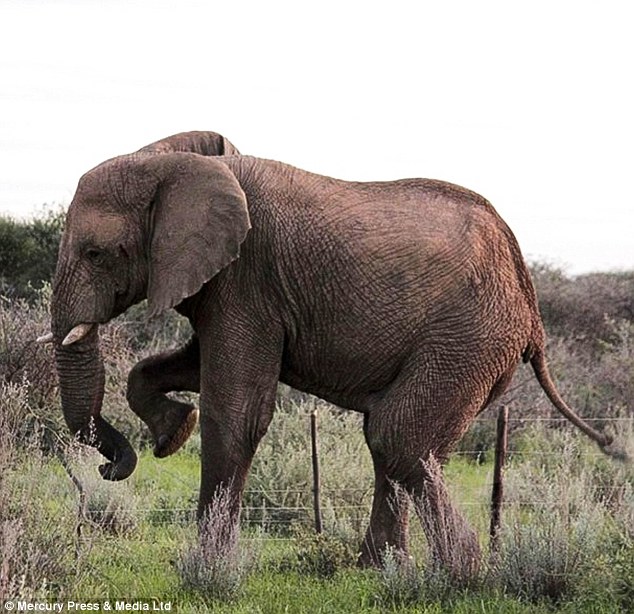 Acrobatic: The elephant makes the whole process look easy despite his size and having four legs 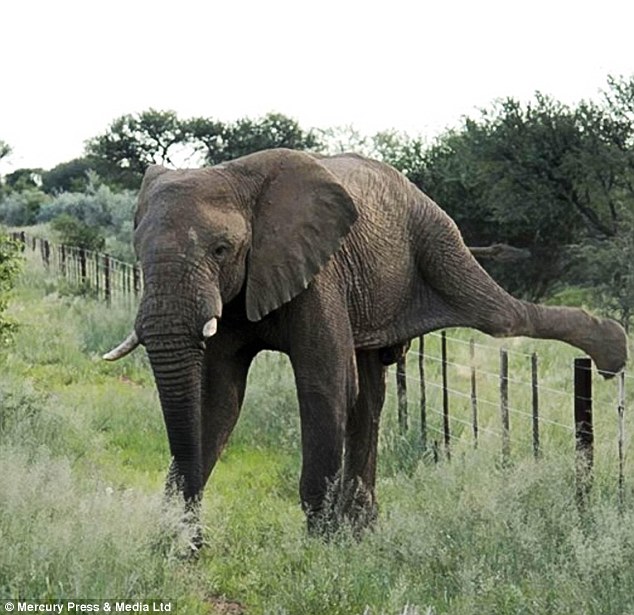 Nearly there: Nellie proves she’s no Dumbo and is now close to escaping 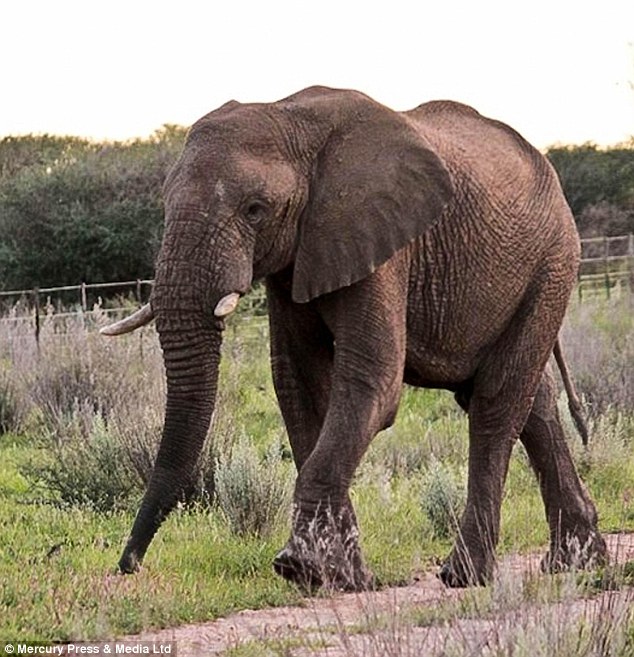 Strolls away: The elephant successfully negotiates the fence and free is to roam

But Nellie isn’t the only elephant dodging obstacles across Africa.

A second elephant was also caught on film skillfully having to avoid an electric fence in Mpumalanga, near the Kruger National Park.

This time the cheeky little elephant steps over the fence to grab a branch from a much-loved marula fruit tree in the back garden of a house.

The elephant is clearly keen to avoid past experiences such as being tangled up or electrocuted by a nasty fence.

After having his snack the young male then lifts both legs back over the fence carefully – despite no current being passed through the electric fence.

Magdel van den Berg, the journalist who filmed the baby elephant, said: ‘It was quite strange to see the elephant do this but it is marula fruit season and elephants love them. He remembered the fence for sure, he is a regular visitor to the area. It was interesting to see an animal think and plan its way around the obstacles, the owner of the property has reported him going as far as their front door, up hills, and over more fences. Quite a busy little boy he is.’

Sadly not all elephants find it so easy to adapt to their manmade surroundings and can experience horrific accidents while roaming.

In May last year, four elephants were killed after they became trapped on a railway line and were hit by a speeding train.

The elephants were part of a herd crossing the railroad tracks in eastern India when the express passenger train plowed into them.

Two adult female elephants and one calf were killed at the scene while another died later from its injuries.

Dozens of elephants have died in recent years in such accidents as trains run through national parks and forests. Activists have called for trains to lower their speeds through such areas. 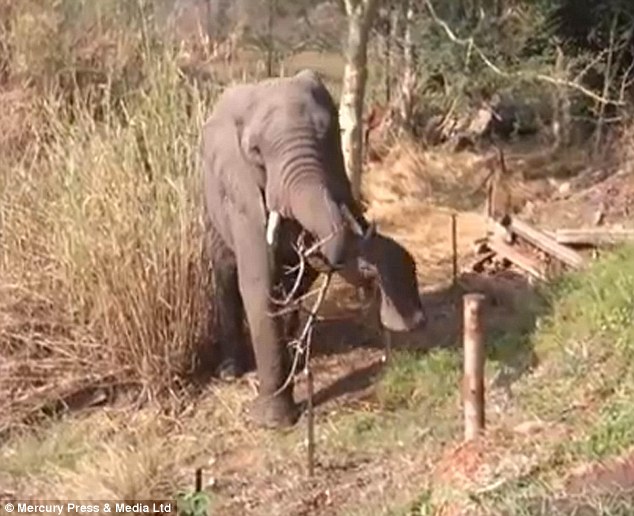 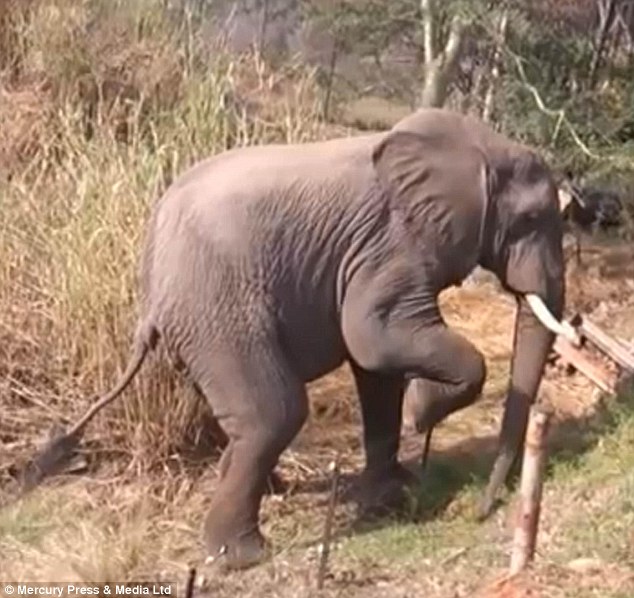 Best foot forward: He’s determined to reach his favorite marula fruit tree and nothing will stand in his way 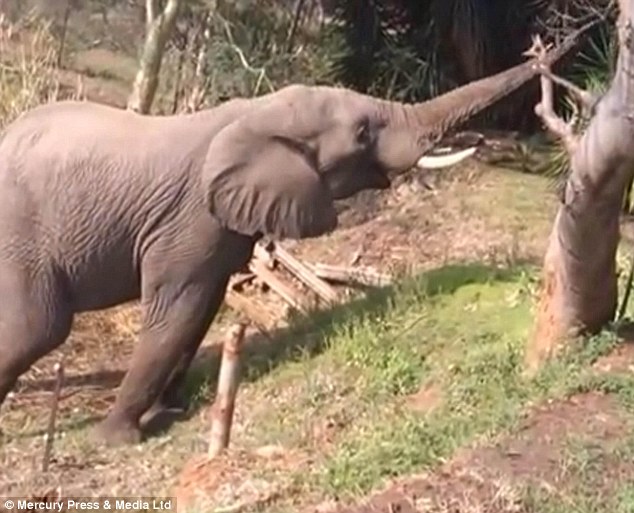 One step at a time: The elephant breaches the fence and enjoys his lunch reaching out for a branch in the back garden of a house