A photogenic group of playful young elephants have been captured in the midst of a mud battle using their trunks to launch dirt at each other.

And as these stunning photographs show the gentle giants seem to be having a great time cooling off from the African heat in the mud.

Photographer Mike McCaffrey captured these muddy eles on his trip to Umani Springs, Kenya, where he was able to see the work of The David Sheldrick Trust who rescue orphaned rhinos and elephants. 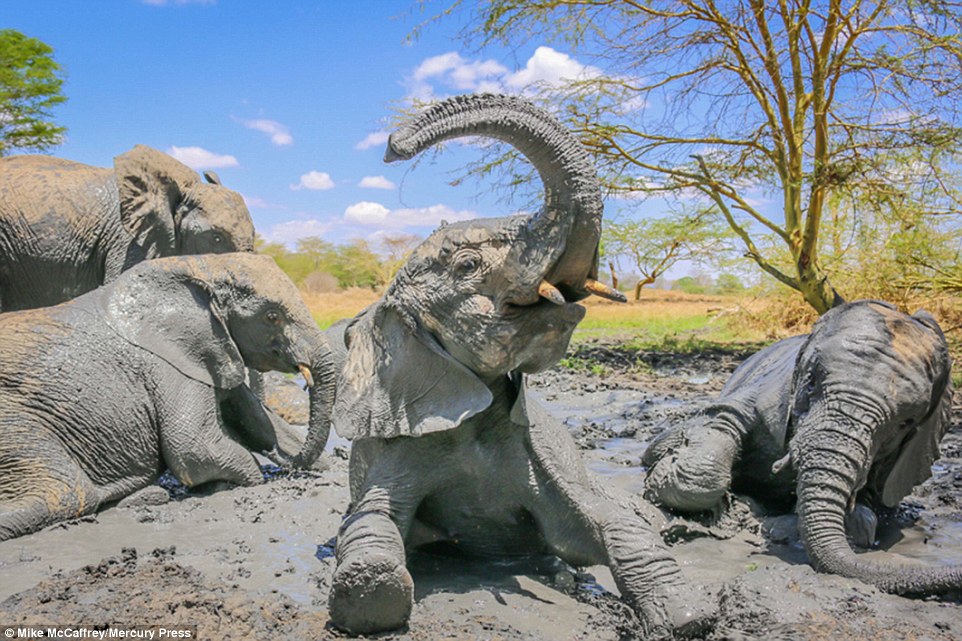 Travel blogger Mike photographed these orphaned elephants cooling off from the African sun with a mud bath in Umani Springs, Kenya

Mike first adopted an elephant when he set up home in Kenya and enjoys going to see the progress being made by the Trust.

The 34-year-old travel blogger, who lived in the capital Nairobi for the past three years said: ‘It is wonderful to see them under such great care as they are being reintegrated into the wild.

‘They are accustomed to people, so it is possible to feed them bottles of milk in the afternoons, stroke their leathery foreheads, and garner an understanding of their developing personalities as they play with each other.’

The elephants’ mud bath also protects them from the sun and any biting insects they may encounter when walking through forested areas. 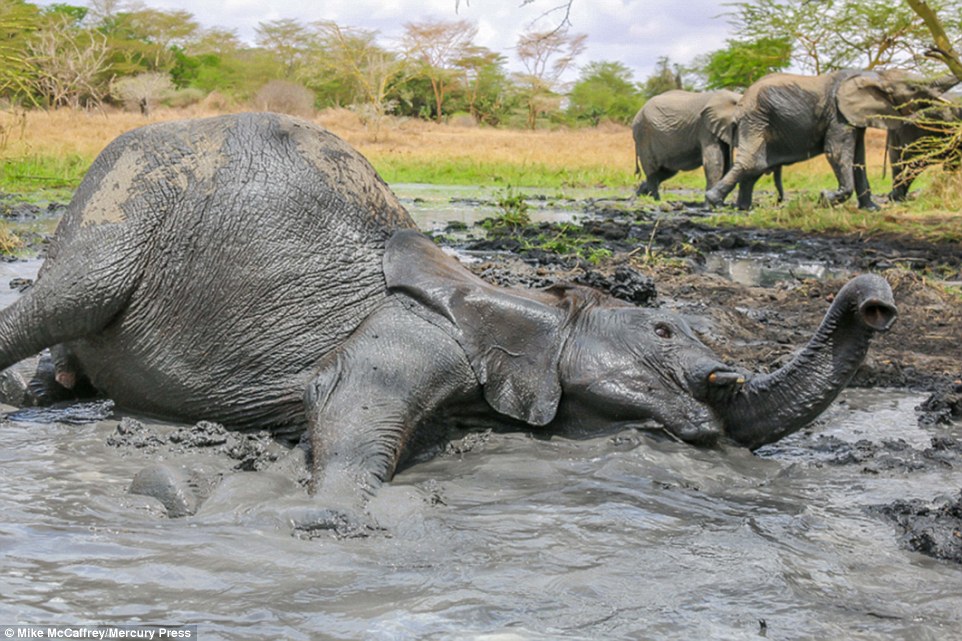 One of the playful giants, who is cared for as part of The David Sheldrick Trust, quickly laid down in the dirt in an effort to cool down 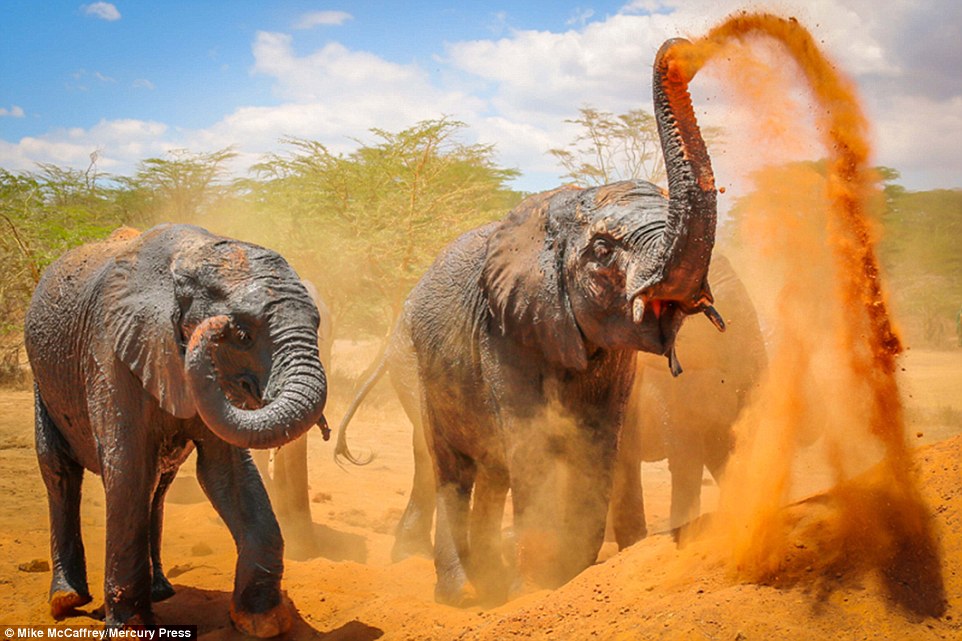 Two playful elephants toss volcanic dust at each other in Unami Springs – apparently, they sometimes even get some on guests 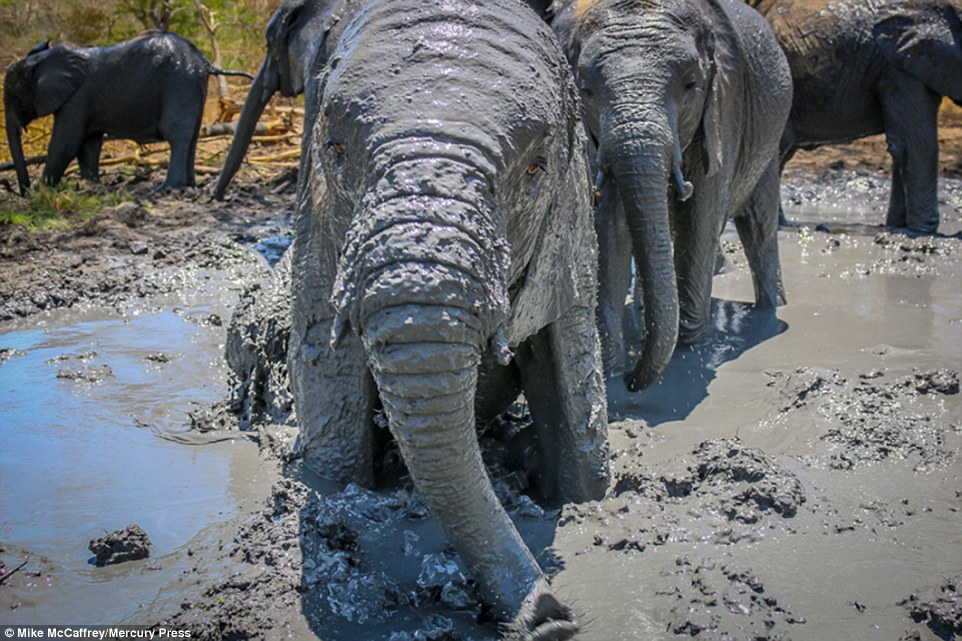 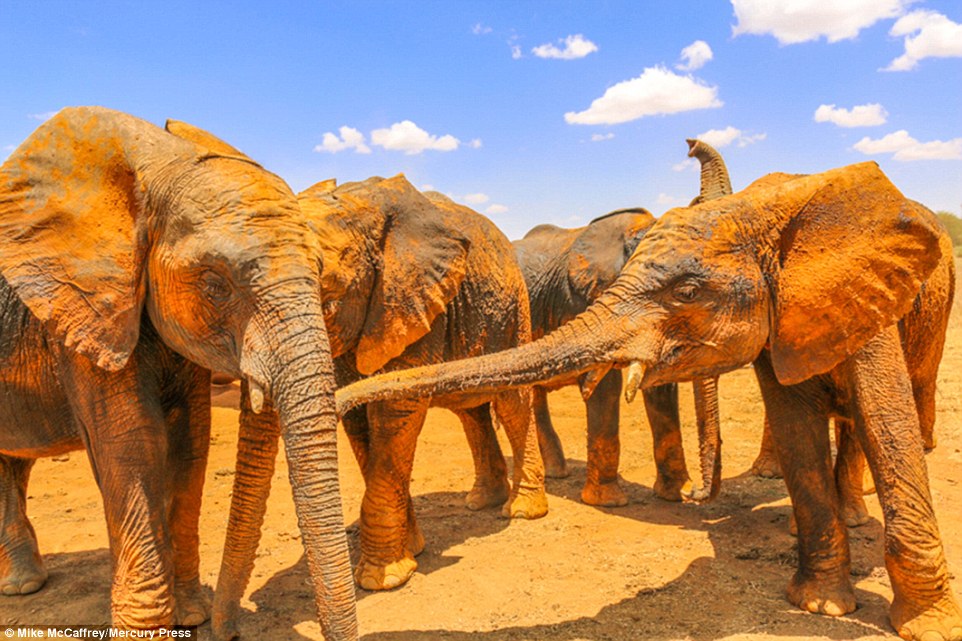 ‘Once they have a full coat of mud, they wander over to the red volcanic dust and spray it all over themselves,’ Mike explains

American Mike said: The baby elephants are incredibly playful and at times naughty, spraying mud and dust all over each other and sometimes on the guests.

‘The elephants spend all morning walking around the Kibwezi forest, and then come back towards the Umani Springs Lodge in the afternoon for a little bottle of milk and some water.

‘As the day is getting hot, they take the opportunity to cool off with a little wallow in the mud.

‘They seem to love it, fully immersing themselves in the sludge and throwing it high in the air.

‘Once they have a full coat of mud, they wander over to the red volcanic dust, taking it in their trunks and spraying it all over themselves and their friends, until they blend into the earth under them.’ 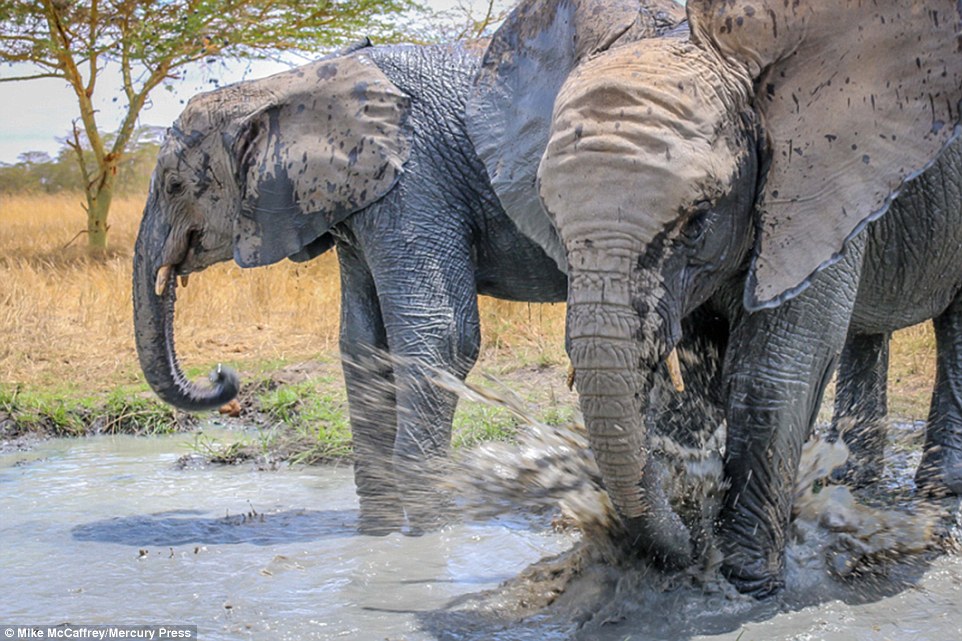 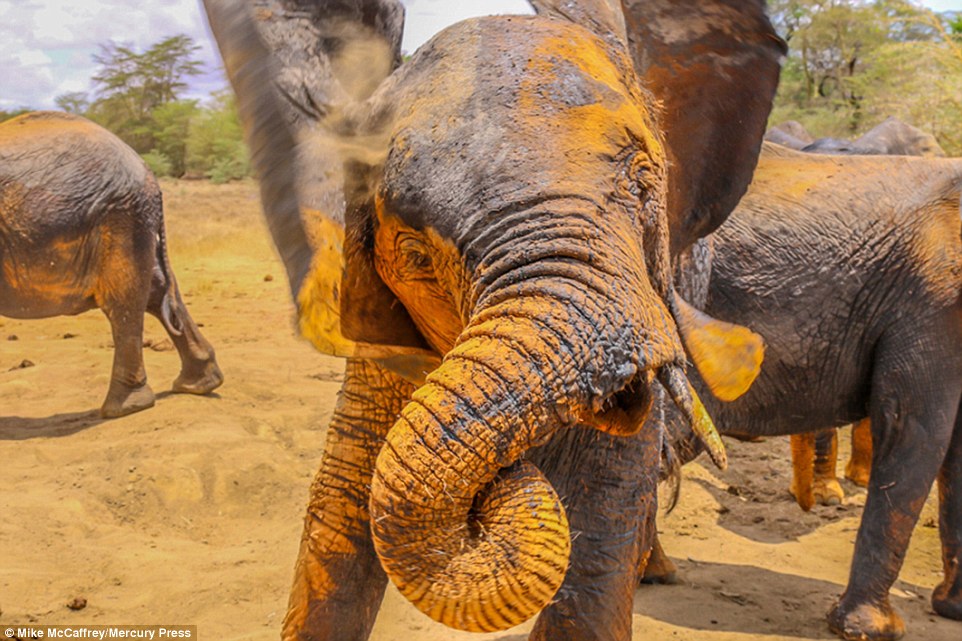 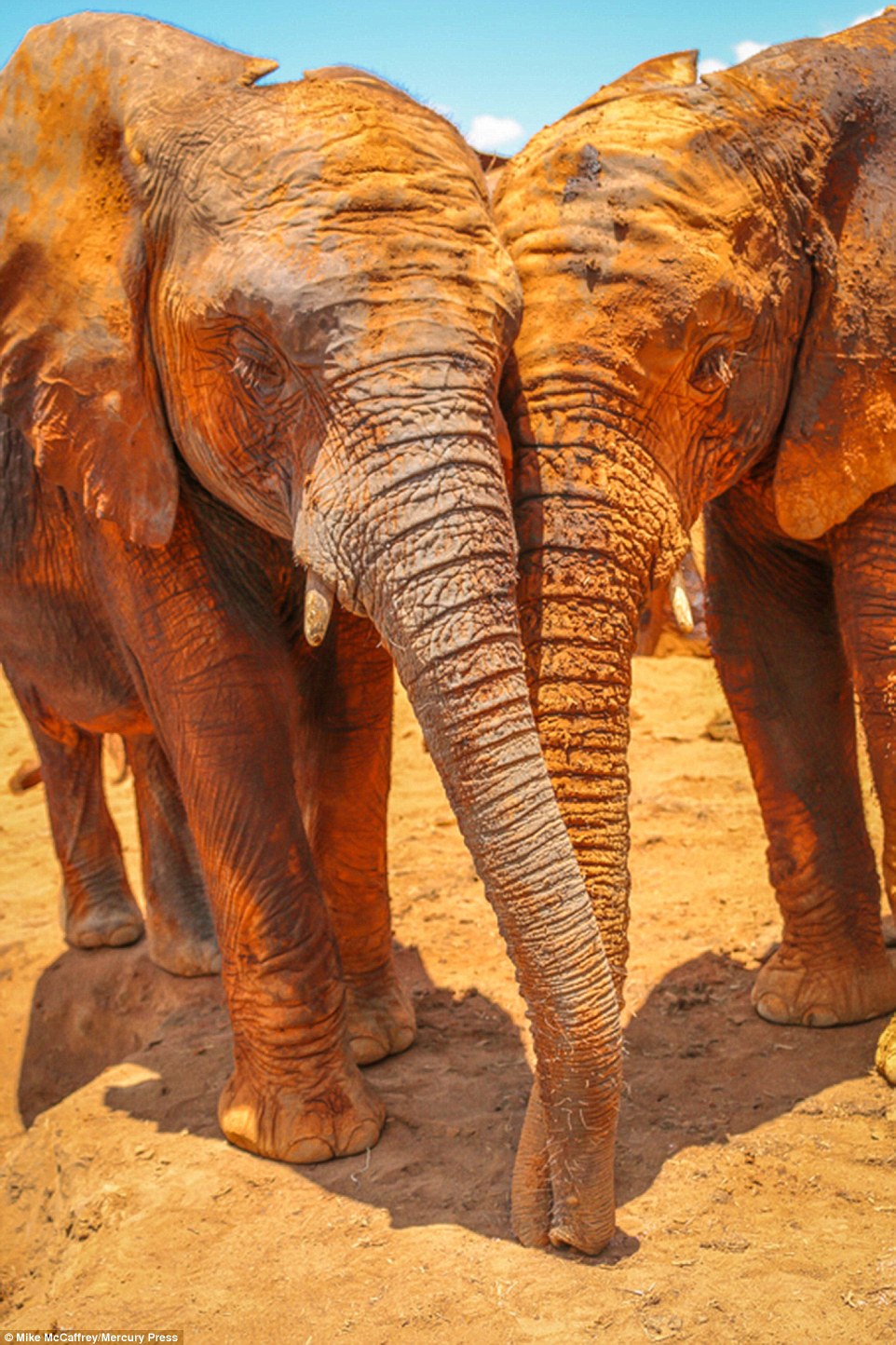 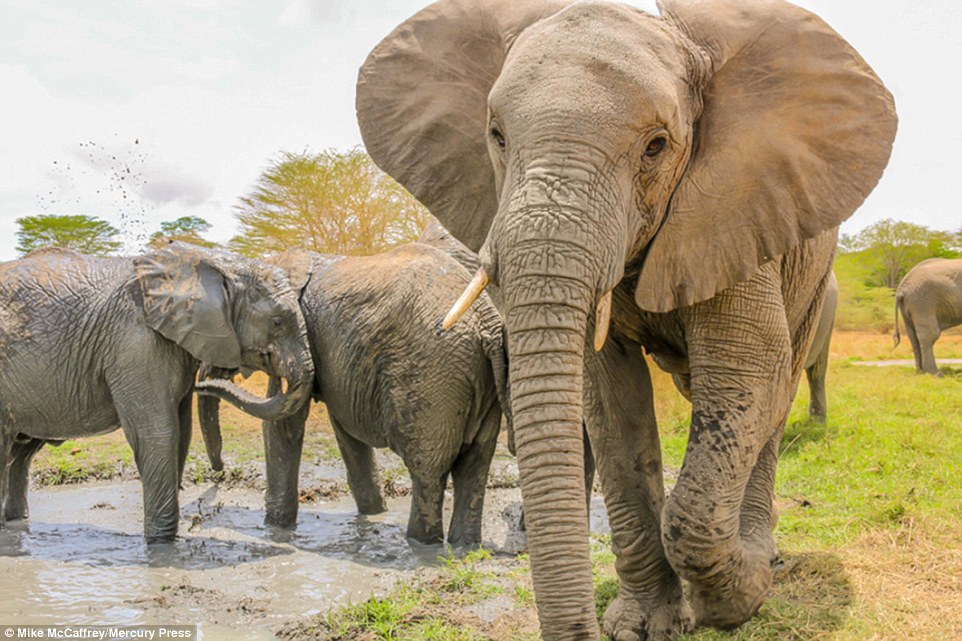 The David Sheldrick Trust is an organisation that rescues both orphaned rhinoceros and elephants, protecting them from ivory hunters

Mike wants people to be able to relate to these images and also understand that these animals are in severe danger with the mass destruction of their habitats and hunting for use of their ivory.

He said: ‘I hope the intimacy of these images helps people relate to these baby elephants.

‘I hope it helps people remember the joy of wallowing in the mud when we were young, the fun of running wild through the forest, and the gentle nature with which we all make friends.’