This is the moment an angry elephant used his trunk as a water cannon to ward off a pack of wild dogs.

The moment was captured on camera by Jackie Badenhorst at the Welverdiend waterhole in South Africa’s Kruger National Park.

The 37-year-old said the elephant had been approaching a waterhole when he spotted the dogs surrounding it, and decided to take charge.

Raising his trunk, the elephant had marched between the dogs to enjoy a drink. 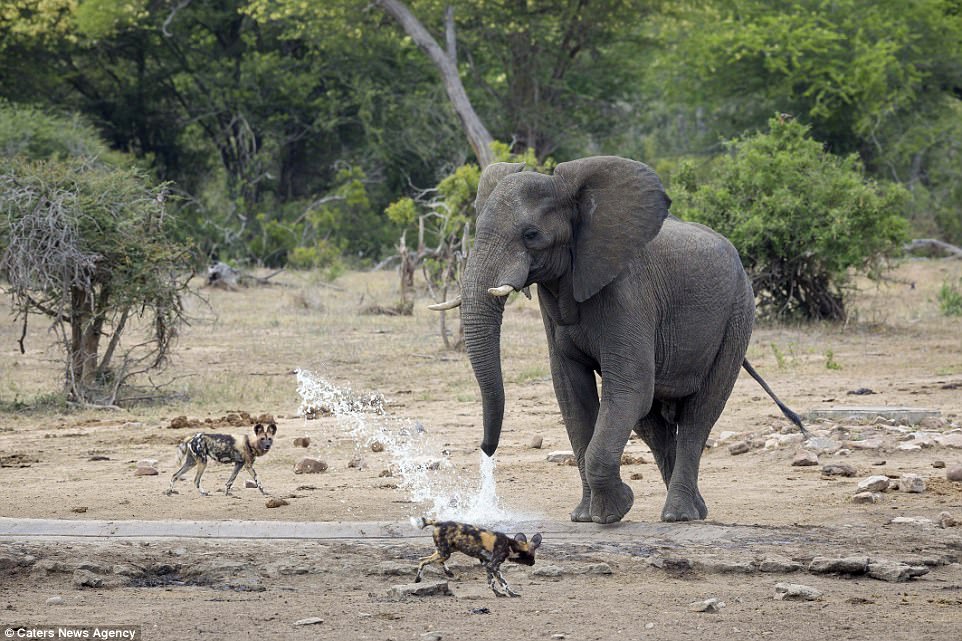 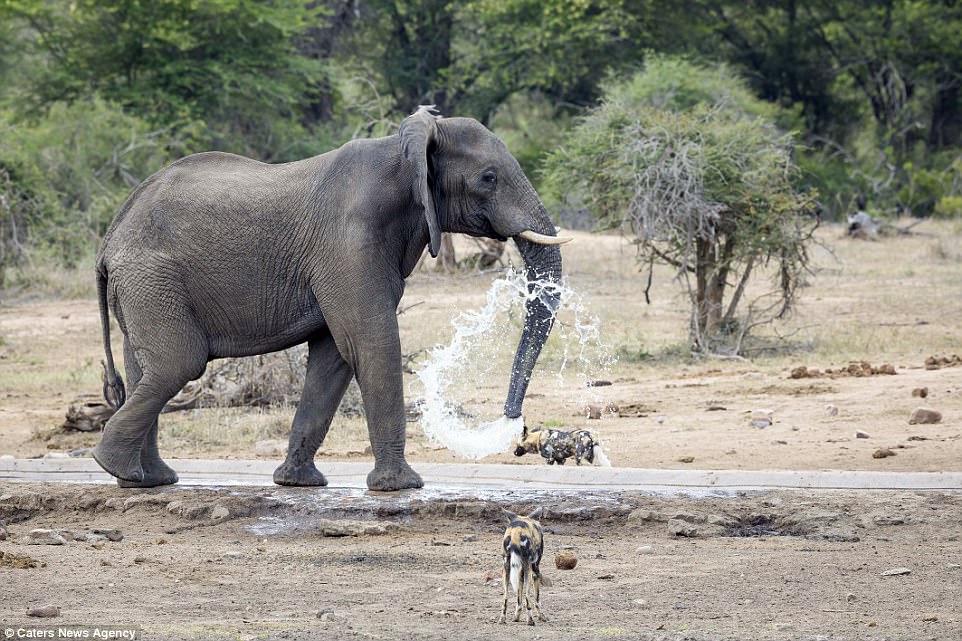 She said at first the elephant just shook his head around and puffed himself up to appear intimidating, but as the dogs kept getting closer, he started spraying them with water

Mrs Badenhorst, from Pretoria, said: ‘My husband and I arrived at the waterhole and found a large pack of wild dogs drinking water.

‘Not long after we got there an elephant bull came ambling along in the distance.

‘As he got closer to the waterhole, he realized the dogs were there and immediately changed his posture and attitude, raising his head to appear larger and more intimidating.

‘He shook his head around a bit and made sure they knew who’s boss.’

The dogs kept playing with the elephant, creeping up and seeing how far they could push him before he retaliated

But when the playful dogs didn’t disperse, the elephant started spraying water in their direction to make them scarper.

She said after a while at the watering hole, the elephant was still being pestered by the dogs and decided to retire to a more peaceful part of the savannah.

‘The dogs were rather inquisitive, almost playful, trying to see how close they could get, how much they could push him,’ she said.

‘The elephant got really irritable and tried spraying the approaching dogs with water – which they would nimbly dodge!

‘He later ran toward them shaking his head, trumpeting.’

As well as spraying the dogs with water, the elephant also tried to disperse them by trumpeting and charging at them 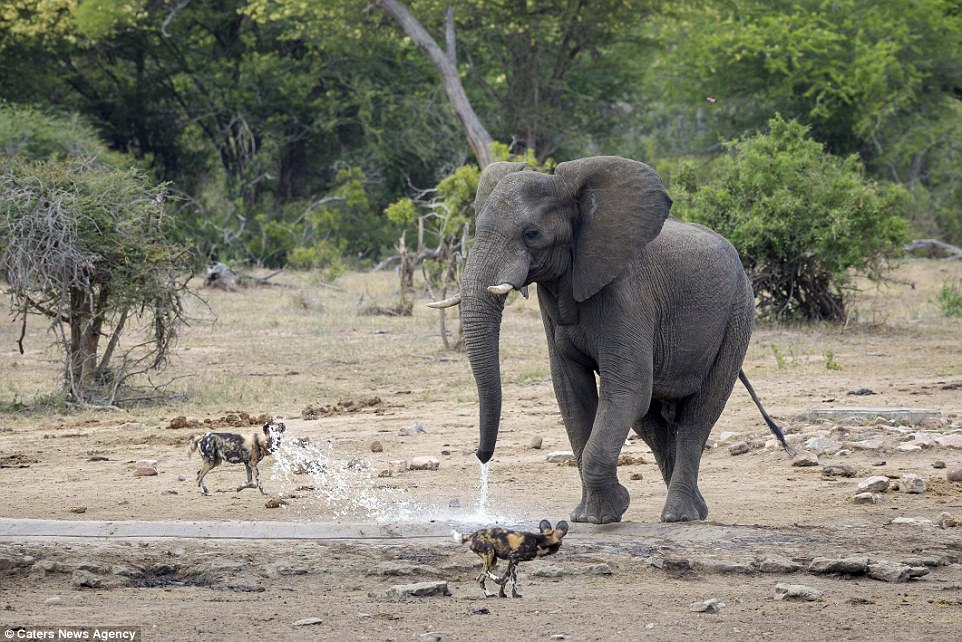 Mrs Badenhorst said she started photographing wildlife while she lived permanently in the bush, and despite moving to Pretoria she still likes to travel to see the animals

She added: ‘Eventually he decided to leave the area and try find some peace and quiet.

‘The dogs proceeded to bother a heard of buffalo, kudus and even tried to catch some warthog for breakfast. It was exciting stuff!

‘I love wild dogs and elephants, so witnessing interaction between the two species is particularly special.’

Ms Badenhorst started photographing wildlife when she lived permanently in the bush.

Despite moving back to Pretoria, she continues to take wild animal pictures as much as possible.

‘I’m a registered field guide and have a serious passion for wildlife,’ she said. 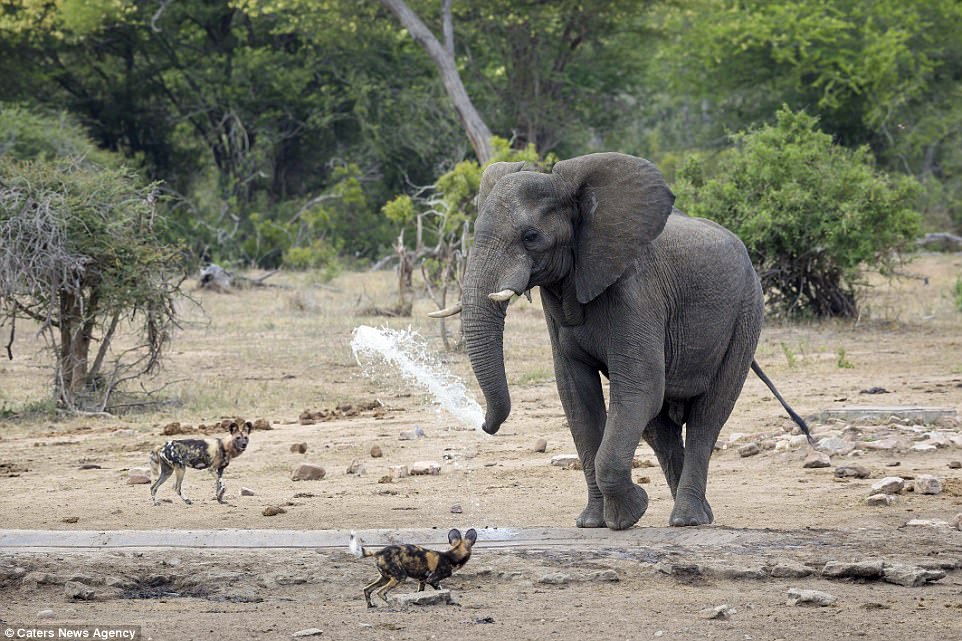 After the elephant had left, the dogs continued harassing buffalo, kudus, and tried to catch some hogs for breakfast

‘I started photographing wildlife when I lived in the bush permanently many years ago.

‘Photography slowed down when I moved back to Pretoria but about five years ago I started getting into it again.’

That’s when she invested in some good equipment and the ‘bug hit for good,’ she said.

‘I now head out into the bush as often as possible and the challenge of getting a great shot just keeps me going back for more and more, it’s seriously addictive!’ she added.

‘I really enjoy the adventure of travelling to remote places, the excitement of not knowing what you may see and photograph and at the end of the day, spending time in nature is what it’s all about.’