As the cause of a traffic jam, it doesn’t come much cuter than this: a tiny elephant struggling to make a quick crossing – and getting a helping hand (or trunk) from mum.

This little chap was the smallest member of a herd who decided to cross the road in the Coimbtore district of Tamil Nadu, a state in southern Indian.

But what makes for a sweet image does not make for happy drivers. 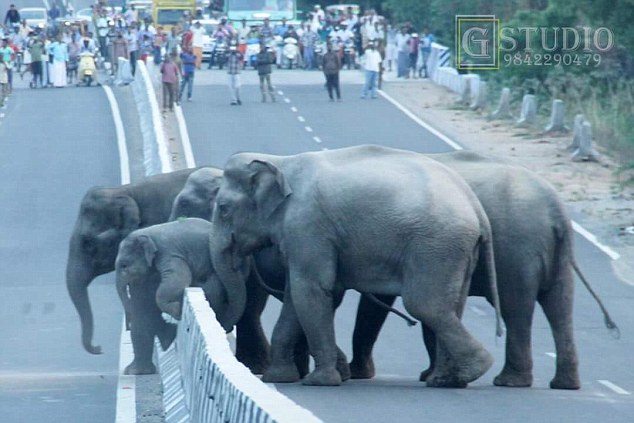 A helping trunk: The youngest member of this Indian elephant herd is given a boost to get himself over the central reservation as the family crossed the road in the Coimbtore district of Tamil Nadu 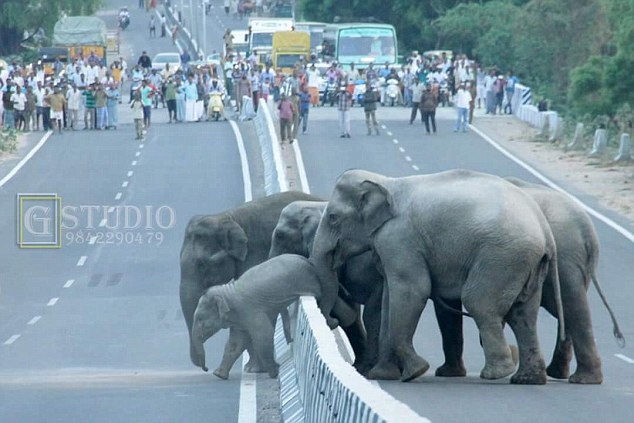 Slow: The herd took hours to cross the road and move out the area, leaving a huge traffic jam in their wake 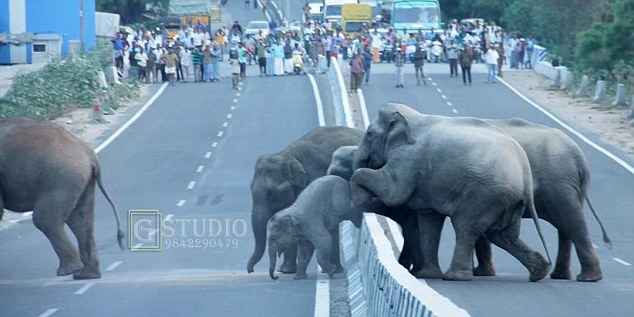 Dangerous: However, no one was hurt in the incident – but with India losing its forest at a rapid rate, more and more elephants and humans are being hurt every year as the two clash

The herd ended up hanging around for hours – leaving trucks, cars and motorbikes trapped on the dual carriageway with no one to go, and nothing to do but watch mother nature’s largest land mammals go about their day to day lives.

But there is a more serious side to the problem than a few frustrated drivers.

As India’s rapid urbanisation continues, the elephants who once roamed the large forests are coming into contact with their human neighbours on a more frequent basis, pushed into their path as their migration routes become blocked.

Coimbatore, and nearby Hosur and Gudalur, are particular hotspots where as many as 700 elephants call the area home.

Wildlife activists claims at least 20 people are killed by elephants every year in this region alone – elephants which, a few years ago, would never have come close a human settlement.

Meanwhile, 10 to 15 of the magnificent creatures are killed on the roads, either by speeding vehicles or poachers after their valuable ivory tusks.

However, the Indian government statistics suggest, across the country, wild elephants kill far more people than tigers, leopards or lions. As many as 391 people and 39 elephants died due to man-animal conflict in 12 months to 2015 across the country. 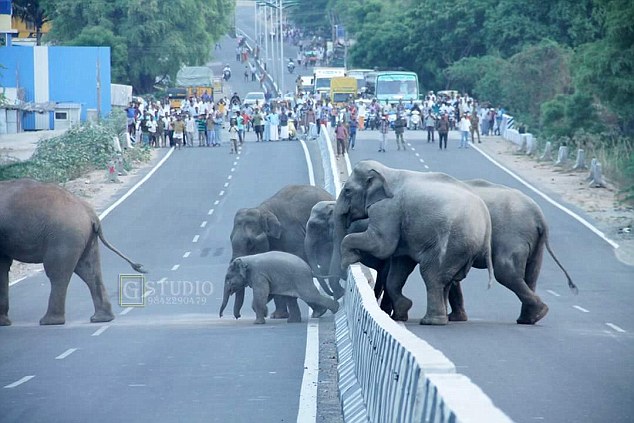 Death toll: There were as many as 391 human deaths caused by elephants last year, and 39 of the large mammals were also killed, sometimes by speeding cars, and sometimes by poaching 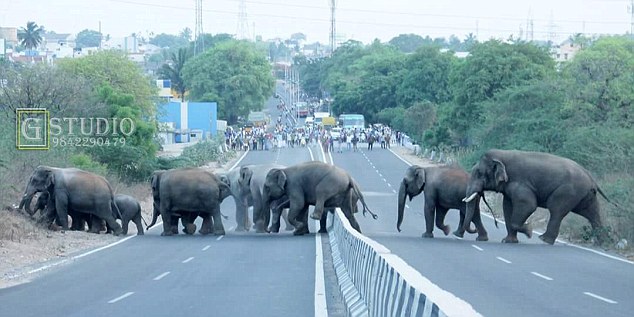 Changing landscape: One of the main reason behind these conflicts is the blocking of the traditional migratory path of elephants

Yet wildlife activist Umesh Marudhachalam is clear on exactly whose fault this is.

‘The problem is not with the animals, it is with the human. We have destroyed their habitat and encroached up their migration route. What is remaining of the buffer should be preserved,’ he said.

One of the main reason behind these conflicts is the blocking of the traditional migratory path of elephants, which results in elephants crossing into human habitations and ravaging crops, activists say